This live webcast from October 2, 2020, spotlights the work of Mingda Li PhD '15, Norman C. Rasmussen Assistant Professor in the MIT Department of Nuclear Science and Engineering.

The title of Li's talk: "A Tale of Two Singularities -- fundamental and energy applications on topological Weyl materials"

Abstract: Topological materials contain robust electronic states against perturbation, leading to exotic fundamental properties and promising applications such as dissipationless electronics and fault-tolerant quantum computations. For a particular type of topological material, the Weyl semimetal (WSM), topology is manifested as a pair of topological singularities like momentum-space magnetic monopoles. In this seminar, after a brief introduction on topology and its link to real life and quantum materials, I introduce our recent research on these paired singularities in a WSM. In one example, we show that how the topological singularities enable the visualization of electronic topology through ionic degrees of freedom called Kohn anomaly; while in another example, we show that how the singularities can be used to break the barrier of thermoelectric power factor by order-of-magnitudes. We conclude by showing a broader phenomena and applications enabled by the topological singularity in a WSM.

Panelist:
Mingda Li PhD '15 completed his B.S. in Engineering Physics from Tsinghua University in 2009, Ph.D. in Nuclear Science and Engineering from MIT in 2015, and did his postdoc at MIT Mechanical Engineering. His research focuses on using neutron and x-ray scattering probes to study topological quantum materials. 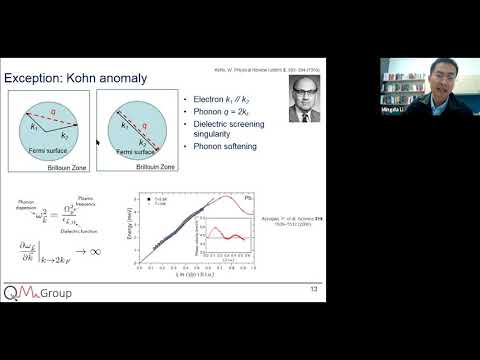 This live webcast from October 2, 2020, spotlights the work of Mingda Li PhD '15, Norman C. Rasmussen Assistant Professor in the MIT Department of Nuc...